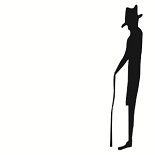 Abdul Ghaffar Khan, the Badshah Khan or Prince of Princes, was a pacifist freedom fighter. Like Gandhi, he became a hugely revered spiritual and political leader at the time when the Indian subcontinent, and the countries to the north of it, were still under British colonial rule. Indeed Ghaffar Khan and Gandhi knew and admired each other.

But Ghaffar Khan was in some ways a still more astonishing leader. He was a Pashtun, born in 1890 in the Peshawar Valley, “Near the ancient city of Charsadda/ Between the Indus and the Khyber,/ Where Alexander the Great had once walked/ And which was thought to be the birthplace of Zoroaster”. By the time he died under house arrest, just short of his 98th birthday, he had spent more than a quarter of his life in prison and led a pacifist faith movement, preaching that “Islam is peace and brotherhood”. Thousands subscribed despite the fact that, as Gandhi himself pointed out, the Pashtuns had no immediate tradition of non-violence.

Quite the contrary. The rules of the “Great Game” had reduced Afghanistan and the North-West Frontier Province to a buffer between India and Russia, one usefully bisected by the Khyber Pass. Its unsurprisingly resistant inhabitants were “brutes who must be ruled brutally and by brutes”. This was the context in which Ghaffar Khan founded the multi-faith Khudai Khidmatgar, or Servants of God, who were “the world’s first pacifist army”. On 23rd April 1930, hundreds of unarmed Khudai Khidmatgar were massacred by the British at Utmanzai while peacefully protesting against their leader’s arrest.

Their sacrifice inspired the international anti-colonial struggle and so helped change the course of history. It was apparently the poet Zafar Ali Khan who wrote, “They preferred death to giving up their precious serenity. They showed the miracle of their perseverance to the entire world”. As it happens, the reference for this quotation is missing from Willams’s endnotes. But these are generally useful if, like me, you know too little about this heroic figure who taught that “the kindest strength is the greatest strength”; who advocated schooling for girls; and who at the age of 95 was imprisoned for holding the military government of Pakistan to the same account to which he had held the militaristic British.

The first 50 pages of Badshah Khan outline this story in simple-to-follow double-spaced lines, which read rather like a children’s book. The 20-odd pages of anti-American polemic that follow might have been better left to the blogosphere.